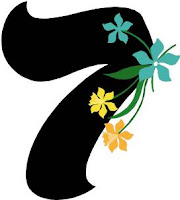 There's a new writer meme going around, and I have been tagged - twice!  In this game, authors go to page 7 or 77 of a manuscript, count down 7 lines, then copy the next 7 lines as their Facebook status.

I had a difficult time with this game because nothing interesting was happening on page 7 or 77 of my published novels, All My Tomorrows & Pulse and Prejudice, or even the sequel to the latter, my current WIP Dearest Bloodiest Elizabeth!  So I had to go to another (completely unedited!) work in progress, which I hope to finish in the next year.

Now that I am thinking about this story again, I thought I would post Page 7 in its entirety for anyone who's interested....

Slowly everyone in their large party trickled out of the restaurant, and they made their way to the exit.  Outside the front doors, the final pleasantries, he conveyed a slight hug and peck on the cheek to April, then turned and repeated this to her.  Her heart skipped a beat.
She walked on to her car, but once in the driver’s seat, she sat holding the steering wheel without turning the engine.  Just as she started to insert the key into the ignition, he tapped on her window.  “You know, I think I could stand one more drink.  How about you?”
What was she doing?
She walked back in with him in silence, his hand on the small of her back as they were seated at a table for two.  She struggled for words to say, just like that one day when he saw her alone at lunch.  “I haven’t seen you in the cafeteria in the afternoon anymore,” she finally said.
His eyes pulled her into them.  “I know.”  He said nothing more, but she understood:  anything more than fifteen minutes would be too much.  She knew now that they had both been resisting this compulsion, like a tongue completely attracted to a raw tooth.
He took her left hand from where it rested on her glass and stared at it as he turned her wedding band around her finger.  “I don’t know what to do here.”
She shook her head almost imperceptibly.  “I just can’t.”
Taking her other hand as well, he intertwined their fingers, sending warmth through her body.  “Let’s just be here now, just like this.  You have no idea how much I look forward to seeing you everyday.”
“Yes.  I do.”
They both neglected their drinks, neither wanting to release their hands.  She didn’t know that holding hands could make her feel so alive.  “I want to know everything about you,”  she said.  “Start from the beginning.”
Staring into her eyes, he said, “What if this is the beginning?”