As with last week's Six Sentence Sunday, in honor of its nomination for the P&E Readers' Poll Romance Novel of 2012, today I present an excerpt from All My Tomorrows.

In this scene, Alice shares a duet with Peter.... 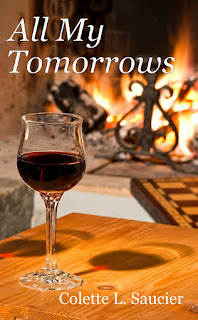 Somehow a microphone materialized in Alice's hand, but – too stunned to move – she couldn’t bring it to her mouth. After singing the refrain, Peter began the second verse, and she forgot he was acting. She might have stood there transfixed if he hadn’t squeezed her hand to remind her to sing. When she began, the audience cheered, perhaps vicariously joining her on stage; but then they all disappeared. She couldn’t see anyone, she couldn’t hear anyone except Peter. He pulled her closer to him, and it pulled at her heart as well. He kissed her hand, closing his eyes and letting his lips linger until he sang again...

Thanks so much to the readers who nominated All My Tomorrows for the P&E Readers' Poll Romance Novel of 2012!

For more six sentence snippets from other fabulous authors, please go to sixsunday.com


About All My Tomorrows:

All My Tomorrows is losing the ratings war.

For headwriter Alice McGillicutty, the past year has had enough drama. Her mother passed away, her last relationship ended in disaster, and now poor ratings are catapulting her long-running soap opera toward cancellation. For comfort and creative inspiration, she begins reading The Edge of Darkness, an old melodramatic paperback she found among her mother’s belongings.

When scandal rips Hollywood bad boy Peter Walsingham off the tabloids and into her studio, Alice doubts the small screen is big enough for his ego – or his entourage. In their battle of pride and prejudice, will Peter’s vanity and arrogance compel Alice to write him out of her script, or can she find a role for him in All My Tomorrows?

"Romance at its best served on a silver platter."

"5 out of 5 stars:  All My Tomorrows has solidified the thoughts I had after reading Pulse and Prejudice, in that Saucier is a master storyteller."

"5 out of 5 stars: Saucier’s sense of humor is sprinkled throughout the story and her apparent dark-side make this a fabulous read!

Now available in paperback or as an eBook for only $2.99

All My Tomorrows Six Sentence Sunday