Good morning, dear readers! I hope you are relaxing on this lovely Sunday. Later, of course, I will be cheering for my beloved New Orleans Saints, but first I have something special and a little different for you for this Sunday snippet. I am joining Victoria Blisse and scores of other authors in the 100th Sunday Snog to raise money and awareness for Doctors Without Borders (Médecins Sans Frontières).

For this blog hop, we will all be posting excerpts from a special kissing scene from one of our works, and in addition to offering prizes, we will be donating to Doctors Without Borders and hope that you might do the same.

I think the first kiss scene of a novel can often be the most exciting part, especially if there has been a lot of tension and buildup to it; so I really didn't want to spoil the first kiss scenes of some of my novels that you might not have read.  Instead, I have a special surprise for you: A scene from my current work in progress - The Widow. This will be my second romantic suspense following the overwhelming positive response to my mystery romantic thriller Alicia's Possession. I am only about halfway done (at 50,000 words!) with The Widow, so I am hopeful that by the time it is released, you will have put this kiss out of your mind and be able to enjoy it again in the context of the novel as a whole.  Remember, it's an unedited work in progress, but be sure to leave a comment to let me know what you think - Oh! and to be entered in my giveaway!

In this scene from The Widow, after traveling together for several days, during which time he has treated her like his little sister, they have just flown into L.A., and Catherine is rushing to keep up with David while trying to figure out why he is angry with her....

“You think I cheated on Adrian.”
He rubbed his eyes then looked at her again, certain he had misunderstood. “Cheated on Adrian?” She nodded. He blew out a frazzled breath and began walking again. “I don’t know what you’re talking about.”
“Adrian was your best friend, I was engaged to him, and with your Latino machismo, you’re angry because I cheated on him that Halloween in college.”
“How did you cheat on him? You said this guy only kissed you.” He increased his pace, and she skipped to keep up with him.
“Well, yes, but it was more than that.”
“Either it was just kissing or it was something more.” He had had enough, more than he could bear, and he glanced around for someplace to hide.
“It…it was kissing, but it was more than that,” she said, struggling to catch her breath. “Could you slow down? Do you even know where you parked?”
He came to a halt and turned to her. “Come with me.” Grabbing her by the wrist, he pulled her into a corridor that was deserted, at least for the moment. She tried to pull away, but he held firm and forced her to meet his gaze. “You think I’m upset on Adrian’s behalf because you cheated on him when you kissed some guy you never saw again? That must have been a hell of a kiss.”
Her chest still rose and fell from the exertion of keeping up with him, and her eyes registered fear and uncertainty. “Yes.” The soft word escaped without her moving her lips.
He took two steps forward until he had her back up against the wall. He let go of his suitcase and slid the bag from her shoulder and let it fall to the ground then leaned over her. “What made this kiss so special?” He had her trapped there, with the fingers of one hand still wrapped around her wrist and his forearm on the wall beside her head. As long as no one found them, he would force her to answer.
She squeezed her eyes closed. “The...the X. I’m sure it was just the drug. It heightens...everything.” 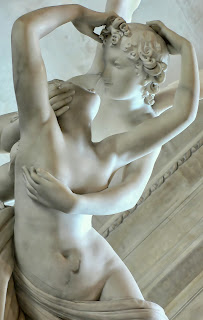 “Look at me.” She did. “So you think I’m upset because of how someone kissed you one Halloween when you were on X?” She didn’t respond, only gaped at him. “Did he kiss you like this?”
He crushed her mouth with his, and she opened to receive him, as if she had been wanting and waiting as long as he had. He released her wrist to wrap his arm around her waist, and she looped his neck in her arms and pulled him deeper into her.  He pressed his hardness, straining against his slacks, between her legs to eviscerate any lingering doubt that he did, indeed, think of her that way.
After all the nights imagining and hours obsessing, the actual act itself required no thought as he fell effortlessly into the wild abandon. All thoughts ceased as instinct filtered through memory overwhelmed him and drove him further into the abyss of bliss. With his eyes closed and their bodies wound tightly together, everything beyond this moment, beyond this woman evanesced, leaving them beyond time and space. Their tongues were so entwined, he didn’t know where hers began and his ended. Her racing heart beat against his chest, almost in synchronicity.
He had slept with dozens of women, but never before had a kiss created such a cavalcade of sensations—hunger yet fulfillment, corporeal but outside of his body, intoxicating but with greater clarity than he had ever known.  Caught in the thrall, drowning in her, he knew she was wrong. The kiss was the drug. 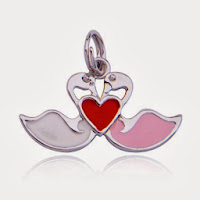 So what did you think? Since obviously I can't give this novel away as my prize, I am giving away a Sterling Silver Kissing Swans Charm to stay with the kissing theme (in the form of a $15 Amazon Gift Card). Just leave a comment below and include your email address so I can let you know when you win! We will find out who wins on Saturday.

Be sure to stop by my blog post for the Sunset on Summer Fun Blog Hop, which ends on Monday, September 30th. I am giving away a signed print edition of Alicia's Possession PLUS a blindfold, but the Grand Prize is your choice of a Kindle or Nook!

Then please continue on the 100th Snog Hop to visit amazing authors and support Doctors Without Borders.

Here is a message from Victoria, who has organized this benefit:

On the Sunday 22nd September until Friday 27th you will be able to visit the below blogs (or click here) and read lots of hot snogs and enter for lots and lots of fabulous prizes! Please consider visiting my Just Giving Page and donating to Médecins Sans Frontières so we can help these brave doctors kiss lots of boo-boos better.
Médecins Sans Frontières/Doctors Without Borders (MSF) is a worldwide movement. They deliver medical aid to the people who need it most, wherever they are. We’re hoping to make at least 100 pounds to contribute to their work. Here’s to many snogs and many donations which will help to make this world a better place.

So leave your comment below, and keep on hopping! Here are a few links to keep you going...

With my first novel published, I created a Facebook "Official" Author Page with no notion that I would receive 100 Likes, and now I have over 1000! I don't know if it's because of my books, my cocktails, or the pictures of my dogs; but I am overwhelmed by your support! To demonstrate my appreciation, I am going to giveaway THREE eBook copies of each of my Pride and Prejudice adaptations - modern and paranormal. Just leave a comment below and tell me which novel you would prefer. And don't forget to leave your email address so I can let you know when you win! Winners will be chosen in one week (the night of June 3rd) and announced on June 4th, which I will, of course, also post on my Page. In the meantime, I will keep on posting bits and pieces from the minutia of my life--be it writing, wine, or my soul-sucking day job. (My mother-in-law says I mainly post about the latter two - as if they're unrelated!) To help you decide which novel you would pref
Please Click to Here to Continue Reading »»»»»»»»» 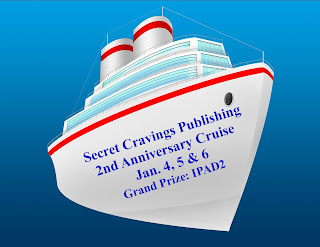 It's the 2nd Anniversary "Cruising with the SCP Authors" Blog Hop!  By participating in this Blog Hop, you will be eligible for these incredible prizes: Grand Prize - iPad2 First place - Kindle Fire Second Place - $50 SCP gift card Third place - $25 SCP gift card To enter,  match up the SCP authors with their cruise destinations and email the entry to: reviewcoordinator@ secretcravingspublishing.com To be entered for the Grand Prize, you must also comment on every participating blog. Plus, leave a comment with your email address below here on my blog for your chance to win an eBook of Pulse and Prejudice - the vampire adaptation of Jane Austen's classic love story and a Secret Cravings Publishing bestseller for 4 straight weeks.... About Pulse and Prejudice When the haughty and wealthy Fitzwilliam Darcy arrives in the rural county of Hertfordshire, he finds he cannot control his attraction to Elizabeth Bennet – a horrifying
Please Click to Here to Continue Reading »»»»»»»»»