Kings and Gigolos: Destiny Blaine has Coffee with Colette 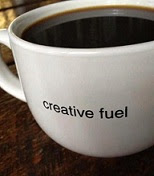 As my frequent readers are aware, I usually take my coffee black. (I like my coffee like I like my men: hot, dark and bitter.) Today, however, I find there are clouds in my coffee, clouds in my coffee.
Unless you are as old as I am (or, for some odd reason, you happen to be a Taylor Swift devotee), many of you may have no idea to what I am referring, but Carly Simon (whom you probably don't know either) had a popular song - when I was a VERY young girl - called "You're So Vain."
When Destiny Blaine, my guest for coffee this morning, talks about her friend (and inspiration), I immediately think of that song. Not that he is necessarily vain, mind you. I mean, I have no idea - I've never met the man! He might be as modest as Mahatma Gandhi. (Of course, whose to say what was going on inside Gandhi's bald head, but I digress.)
I am absolutely delighted to have Destiny here today because she is a fabulous author and a wonderful friend, and I just know you are going to be as excited about this sizzling hot series as I am. PLUS, Destiny would like to hear from YOU, dear readers: How much is too much? Where would you draw the line? I, for one, hope this acquaintance of hers maintains his jet-set lifestyle (always where he should be all the time, or when he's not, he's with some underworld spy or the wife of a close friend) to provide more fodder for Destiny's wicked, wild rides!
~Colette


Life of Kings and Gigolos

My husband has a friend who lives the life of kings. I’m not sure what he does. We haven’t figured that one out yet, but he is one of these people who will entertain you from dawn until dusk. If you just returned from France, he can top that. He was in Berlin when the wall came down. If you grilled out steaks the night before last, he was indulging in caviar on a yacht sailing the other side of the Atlantic.

Fact of the matter is, he probably was. He isn’t one of these guys that will do what he can to trump your tales. He just lives the life of magnificent wonder. Again, we haven’t figured out how. He’s an entrepreneur, so to speak.

In recent months, I’ve tried to think of ways to incorporate some of his storytelling into a manuscript of my own and I finally found it—gigolos. Yes, you read that correctly. I’m writing about gigolos and not just any gigolos, but men who crave a woman’s love but can’t quite fathom giving up their luxurious lifestyles. That is, until they fall in love with Mrs. Right. No, the Mrs. isn’t a typo.

Stiff Rain Press offered a wonderful opportunity for writers who want to stretch their imagination and reach beyond the borders of what might otherwise be viewed as ‘unacceptable’ in romance. When I first heard about Stiff Rain’s guidelines, I couldn’t help but break out into a happy dance. I had the perfect opportunity to turn one of my backburner manuscripts into a reality and The Trophy Club was born.

In Wives of Nashville, for example, our heroines are tired of living in marriages wrought with neglect and adultery. They’re fed up with hearing all about their husbands’ extra-curricular activities, and they’ve decided to do something about it. They’re reaching out to male companions in hopes of holding their marriages together while exploring a new world of sex, bondage, and illicit affairs.

As a romance author, I was tempted to sort of tiptoe into the world of taboo romance. You know. Test the waters. However, as I started writing Wives of Dallas, the kid gloves were tossed aside. I haven’t had this much fun writing a manuscript in at least a half-a-dozen years and it’s all so new, fresh, and exciting.

As I reach the end of the first novel-length romance, I’d love to hear your opinions. How hot is too hot? How raunchy is too over-the-top? Do you have certain boundaries you won’t cross as a writer and if so, what are they? Readers, weigh in with your opinions, too. Will you read taboo romances or is the idea of ‘taboo’ already too much for you?

The Trophy Club novels are coming soon to Stiff Rain Press, and to celebrate the upcoming release date, I’m asking readers to drop an email to destinyblaine@yahoo.com if they’d like to be notified when the first book debuts.

I hope to share some exciting adventures with you. My gigolos are sort of like my husband’s friend. They’ve lived full lives, but their true escapades are only just beginning. I’ve documented every last one.

Hopefully, you’ll come along for the journey. This will be one exciting ride!

How NAUGHTY do you want it?
How DIRTY do you need it?
How RAUNCHY can you stand it?
ONLY at STIFF RAIN PRESS