When It's Almost Impossible to Appear Tolerably Cheerful 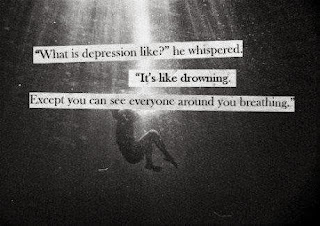 Gentle readers, Recently, I "came out of the closet." I revealed what only a handful of even those closest to me know: I have Major Depressive Disorder. I have always considered this secret embarrassing, a sign of weakness. People who know me are shocked to find out because I am generally outgoing, joking, and bubbly in public; but look at this list of others who struggle with depression, and you'll be amazed by all the comedians laughing on the outside.

I do this now because October is Depression Awareness Month, and I have been made inherently aware recently of how little understanding those who have never faced this darkness have of the experience, how they think we should just "snap out of it" or tell someone "Oh, come on, you aren't bipolar" until they witness a psychotic break. Southern Girl Press and To Write Love on Her Arms are collaborating on a book sale benefit in an effort to help those who have never had to deal with depression understand.

Throughout the month of October, all royalties from a trio of vignettes entitled Alicia Embracing the Dark will be donated to TWLOHA, a non-profit organization that focuses on hope and relationships, in order to raise awareness, benefit the organization, and highlight National Depression Screening Day on October 10th. A Special Edition of this short collection will be available only from Amazon for 99¢ for Kindle or Kindle apps for any device.

Alicia Embracing the Dark is intended to express some aspect of depression as experienced by each author at some point in her life and is published collectively under the name of the fictional heroine of Alicia's Possession, selected because she suffers from major depressive disorder and suicidal thoughts in the wake of her collapsing marriage in her own story, in which depression is a primary motif.

I originally announced this benefit and "confessed" my own experience with depression on Austen Authors, a condensed version of that post I have included below.

When one thinks of Elizabeth Bennet, the beloved heroine of Pride and Prejudice, words such as witty, curious, and adventurous come to mind. She is independent, frank to the point of being impertinent. Her mother describes her as “headstrong” but “good-natured.”

With her vivacity, Darcy found himself caught by her “easy playfulness,” and she describes herself as someone who “dearly love(s) a laugh.” Indeed, practically from the first moment we meet her, when Darcy snubs her at the Meryton Assembly, “She (tells) the story...with great spirit among her friends; for she had a lively, playful disposition, which delighted in anything ridiculous.”

No one would ever describe Elizabeth as being depressed—except Jane Austen herself.

A universal quality of twenty-year-olds, which still holds true two hundred years later, is their belief that they know best; and Elizabeth relies on her own intuition and first impressions to formulate misguided judgments. After reading Darcy’s letter, she must accept her folly, vanity, and pride and finds the self-discovery humiliating. Then Miss Austen writes that “as she considered that Jane’s disappointment had in fact been the work of her nearest relations, and reflected how materially the credit of both must be hurt by such impropriety of conduct, she felt depressed beyond anything she had ever known before.”

In other situations, however, Miss Austen emphasizes that “it was her business to be satisfied—and certainly her temper to be happy” and “(i)t was not in her nature...to increase her vexations by dwelling on them….and to fret over unavoidable evils, or augment them by anxiety, was no part of her disposition.” Yet she obsesses over Darcy’s letter, “wandering along the lane for two hours, giving way to every variety of thought—re-considering events, determining probabilities,” until “she was in a fair way of soon knowing (it) by heart;” and “with a mind so occupied, she might have forgotten where she was.”

Miss Austen tells us, “(I)t may be easily believed that the happy spirits which had seldom been depressed before, were now so much affected as to make it almost impossible for her to appear tolerably cheerful.” Following Lydia’s disappearance with Wickham, that event “rendered any other excuse for the lowness of her spirits unnecessary… had she known nothing of Darcy, she could have borne the dread of Lydia's infamy somewhat better. It would have spared her, she thought, one sleepless night out of two.”

Jane Austen recognized the symptoms of depression: Difficulty concentrating, feelings of guilt and hopelessness, insomnia, loss of interest in pleasurable activities, persistent sad, anxious, or “empty” feelings. Whereas she used to share everything with her sister Jane, she now withdraws, becoming secretive, and tells her nothing of her regard for Mr. Darcy to the point that Jane thinks she must be joking when Elizabeth tells her they are engaged.

Did Miss Austen know someone who dealt with depression? Or could she herself have had personal experience?

Nevertheless, Elizabeth's depression would be considered “situational,” as her spirits were “soon rising to playfulness again” (although her anxiety in trying to keep Darcy away from some members of her family “took from the season of courtship much of its pleasure”). Many others live everyday with clinical depression or major depressive disorder, and try as they might, their spirits cannot rise.

Although certainly not as stigmatized as in the past, even today, with 350 million people worldwide and as the leading cause of disability, depression remains a silent, shameful secret to most who have it. It even has to share a ribbon color with pedestrian safety!

The list of prominent people with major depressive disorder would shock most. Winston Churchill referred to it as his “Black Dog.” J.K. Rowling conveyed her experience with depression in the form of the Dementors in the Harry Potter novels, “literally” sucking out her soul. For me, it is a heavy, black wool sack that engulfs me; and I can’t get out of it.

Yes, I am “confessing” here for the first time publicly that I have struggled with clinical depression for nearly fifteen years. I have witnessed members of my family, in obvious need of help, self-medicate with drugs and alcohol. I had an uncle who drank himself into oblivion until ultimately he brought an end to his suffering with a shotgun. Someone else dear to me has bipolar disorder but cannot bear the side effects of the drugs.


They say to write what you know. Perhaps this did contribute to the dark dissonance within my vampire Darcy in Pulse and Prejudice; and just as Miss Austen tells us of Elizabeth’s depression after receiving his letter, I write of Darcy’s depressive breakdown following her rejection of his proposal. Depression is a primary motif in my last novel Alicia's Possession, as well as in my current work in progress, Viuda - The Widow; and I allude back to Miss Austen's references to Elizabeth’s depression in my other work in progress, Dearest Bloodiest Elizabeth, the sequel to Pulse and Prejudice.

Those who have never experienced depression find it difficult—if not impossible—to understand. When it overcomes us, why can’t we just snap out of it? Someone who I know loves me once said, “I just want you to be happy.” Well, yeah, so do I! In Stranger on the Earth: A Psychological Biography of Vincent Van Gogh, Albert Lubin writes: “The desire to rid himself of depression—and the loneliness, the despair, and the fears that were part of it—was the most powerful force that motivated Vincent to become an artist….” Others just can't understand, we all want to be free of the Black Dog.

And for anyone reading this for whom this might hit close to home, I will share a part of the Vision of TWLOHA: